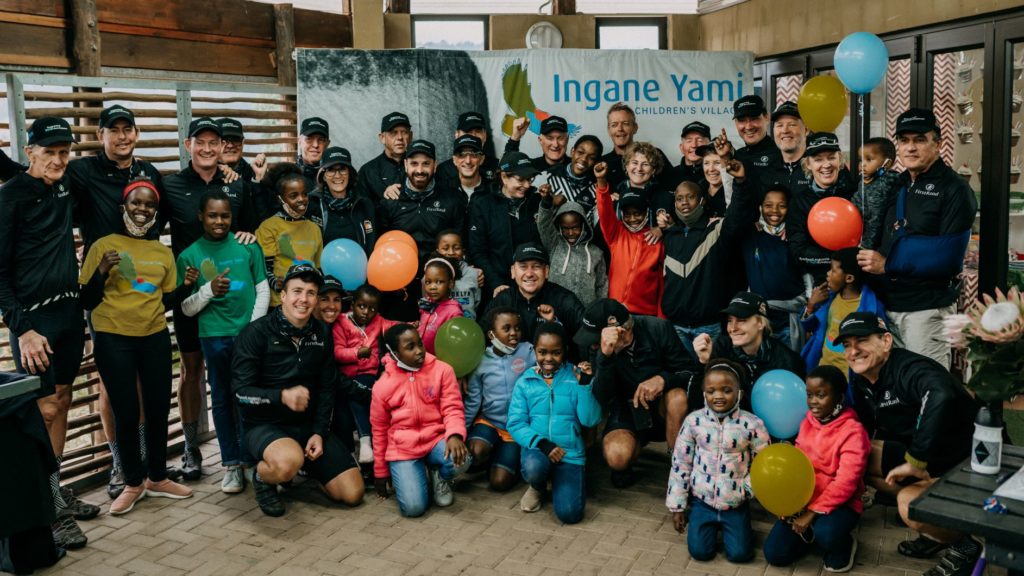 Our FirstRand TransAfrica cyclists were delayed by COVID, but not defeated!
The FRTA 2021 Adventure took place on Saturday 8 May – Saturday 22 May.

The theme for the 2021 route was “SOMETHING OLD, SOMETHING NEW, SOMETHING BORROWED, SOMETHING BLUE”.
It was designed to be a beautiful, challenging, memorable adventure. It combined highlights of the past three FRTA’s (2014, 2016 & 2018) while adding a few new routes to conquer.

The Durban team left Kloof on Saturday 8 May. They drove for two days via the Oude de Kraal near Bloemfontein. They met up with the Johannesburg riders at Price Albert. And on Saturday 10 May they officially started the FirstRand Trans Africa Adventure. Day 1 saw the cyclists conquering the iconic Swartberg pass. From there they road 137km over 5 major passes. Day 3 the team continued their ascent up into the Karoo to Rogge Kloof, and then descended the technical ‘Wall’ into the Tankwa and once again took on the Gannaga pass.
The ride continued North on undulating roads facing serious head winds. Then a day of border riding near Lesotho before heading into the green fields of Natal. From there (stage 9) the FRTA cyclists rode in and out of the Creighton and Umko valleys, and enjoyed a day of some single track (Stage 11). Then on Saturday 22 May the FRTA team completed their 1150km’s of riding with a short ride ‘home’ to Ingane Yami.

It’s hard to adequately describe the depth of emotions that were felt as the riders returned on that 22 May . The atmosphere was electric as everyone eagerly awaited the arrival of the riders.

At 14:00 the riders rode through and everyone erupted with applause! Our children were bouncing off the walls with excitement! The riders were all wrecked with emotion. The tangible experience of WHY they choose to ride over the past 12 days confronting them on every level…… “a crazy explosion of emotions… an explosion of realization of what we’ve done this for” (William Wilson)

The FirstRand Trans Africa Adventure raised a REMARKABLE R 1,820,000!
This has gone directly to the Ingane Yami Children’s Edufund. This fund is set aside for the sole use of educating the children at Ingane Yami both now and into the future.

We wish firstly to thank our headline sponsor FirstRand who, for the third event in a row, have said we want to make a difference by developing the Youth of our Country. They have done so openly and have given the Trans Africa team the freedom to create an event that has multiplied their generosity far more than we and they had ever hoped.

We also want to thank every single sponsor who came on board to support a rider, and ultimately invest in the Education of our children. For names of all sponsors, see the Trans Africa Adventure. Thank you for your generosity in such a difficult time!

Last not certainly not least, we want to thank the support team, riders and their families. There were major sacrifice made day-in and day-out during the adventure. Riders choosing to carry on with a climb despite fighting against brutal head winds. Riders and Support Crew choosing to get up early, face the cold and get back on the bike/ in the car despite long hours and sore muscles! A few rider’s had bad falls. One of the riders, Sorin, actually broke his collarbone and was sadly unable to carry on. Another cyclist, Edgar, also fell and carried on riding with cracked ribs!

But the sacrifice didn’t start on 8 May. Each rider and their family had sacrificed hugely from months before when training began. Each rider had to commit to raise a minimum of R 20,000 each in order to participate. Some riders asked business colleagues, or challenged corporate clients. Some riders even sponsored themselves and gave not only their time but also their money. The support crew spent countless hours plotting out the routes, organizing accommodation and getting all the behind the scene details in order.

The riders, families and support crew can proudly say they achieved the goal of the Adventure- to live a life of significance. They used what was in their hands to make an impact on the next generation of leaders in our nation.

The achievements of the FirstRand Trans Africa Adventure is way beyond anyone’s expectation and is testimony to what can be achieved when a group of people get together for a common cause that they are passionate about.

Our FirstRand TransAfrica cyclists were delayed by COVID, but not defeated! The FRTA 2021 Adventure took place on Saturday 8...

Our children, Siyaya soccer boys, moms and Bheki are still talking about the dream come true — when Benni McCarthy...

Colleen Lotz has been part of our Child Sponsor Family since we first launched the programme in November 2016. Like...