FirstRand TransAfrica: Raising Over and Above! 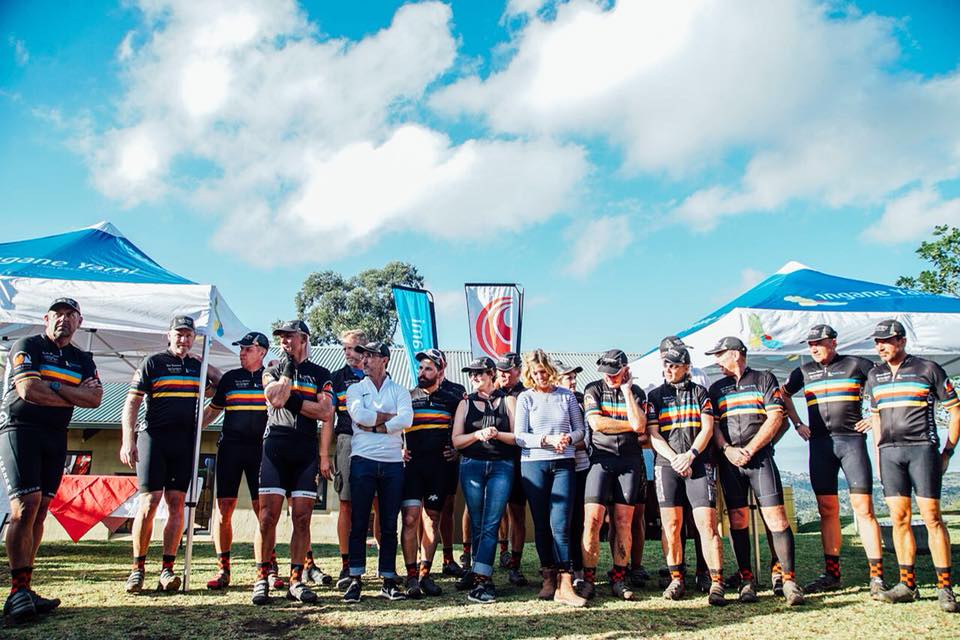 The FirstRand Trans Africa Adventure is a perfect example of an individual, John Armstrong, who used what was in his hands to do what he could to make a difference, and which has grown to allow countless individuals and companies to be able to participate and do the same.

This year’s adventure saw 20 cyclists and 5 support crew mission from Knysna through to Durban, covering 1132km of riding and 15060 meters of climbing.
In 2016 FirstRand came on board as the headline sponsor, giving the team the freedom to create an event that has multiplied their generosity beyond expectation. Through the immense generosity of FirstRand, and with the efforts of each rider to get an additional 25 corporates involved, the adventure raised an unprecedented and unexpected R1,575,000

These finances will go to create a sustainable legacy via an Education Fund that will finance the education costs of the current and future children of Ingane Yami children’s village.

Stage 1 – Ysterhoutrug (Iron Legs): The entire adventure kicked off on Tuesday, 8th May in the Knysna forest with a tough and steep climb from the base of the Prince Alfred pass and into the little Karoo. The highlights of the stage was the breathtaking scenery. The team overnighted at Mountain Pastures – a remote game farm in the mountains.

Stage 2 – Over the Mountains: Took the cyclists through Uniondale Gorge and then a magnificent view of the Swartberg and Little Karoo as they ventured off road for the day. A night at the House Martins guest lodge refreshed everyone.

Stage 4 – To Hell and Back: Lived up to it’s name, and was the big tester – 1725m of climbing up the spectacular Swartberg pass with what proved to be a nasty detour down the road to Die Hell. This stage pushed riders to the brink. The Dennehof guest house provided much needed comfort and relaxation for the night.

Stage 5 – Vlaktes: This stage was 130km of peloton riding through the Great Karoo to the one horse town of Reitbron The transit at the end took us to the Karoo National Park.

Stage 6 – Double Trouble: Started with a long drive to the Buffels dam for the start of the big stage – 151km through Murraysburg, the Cambedoo reserve and down the escarpment to Graaff Reinet . The reward, a night in the Drosty and dinner at the Polka restaurant which opened especially for the team on the Sunday evening.

Rest Day – Finally, the team had a late start, lazy breakfast and time to sort out washing, bike repairs and a few minutes to catch up with the world before a long 380km transit to Lady Grey and the Riverside Lodge. The weather, up to this point, had been perfect with blue skies, cold mornings and lovely autumn temperatures in the day. As the team neared the Southern Berg, however, a cold front promised difficult days ahead.

Stage 7- Hang Ten: The combination of a strong ice-cold head wind, with almost 1900m of climbing on unceasing sharp climbs, and the challenges of altitude made this stage the hardest stage for many. The scenery was spectacular though as they rode along the foothills of the Berg.

Stage 8 – Misty Mountain: Naude’s Nek, the great challenge for the day, is the second highest dirt road pass in South Africa and the highest point reached on Trans Africa. The cyclists rode from Walkerbouts Inn to an elevation of 1817 metres, climbing gradually steeper to the top of the Nek at 2587 metres. The morning temperature was minus two degrees and the cars were frozen up.

Stage 9 – R U Riding or R U Hidin: Tired legs and sore bodies meant that each stage was just getting that much more difficult. This stage was 134 km, the second longest, with 1800m of climbing. The last 30km on the dirt to Penwarn was a slog and all the cyclists had to dig deep.

Stage 10 – Two Rivers: Was a great stage with great weather, a much welcomed relief from the previous 3 days! That night, many of the riders, were joined by their family and friends to celebrate what was the last night of the FirstRand Trans Africa adventure. Julian Cox, 2016 rider, was there to offer his congratulations and thanks to the riders and support crew, while John officially thanked everyone and Henry spoke on behalf of FirstRand

Stage 11 – Ekhaya: The beads which the riders received every morning finally spelt TRANSAFRICAN as that is what they had all become. This was no easy last day though, and the stage ended up 7 km longer than expected, meaning the team arrived at the Village exhausted, overwhelmed, and incredibly satisfied – they had achieved the impossible!

The welcome at the village was emotional, special and humbling for the riders, the support crew, and the family and friends who welcomed in their heroes. We were honored to have Jaco & Belinda from FirstRand join us as surprise guests. Gifts were given to the support team and riders, including pictures the children had made for each person, which was a touching moment for all, a reminder of the why that pushed them the 1132km to this place, this beautiful light on a hill, Ingane Yami.

If you missed our December Ingane Yami Newsletter, you would have missed the very exciting news: we welcomed home a...

The end of the year is a busy time for everyone, and our Ingane Yami school is no exception! School...

After 6 gruelling days of non-stop pushing their bodies to the ultimate limit, Bruce Hughes, Mike Morris and Stefan Terblanche...