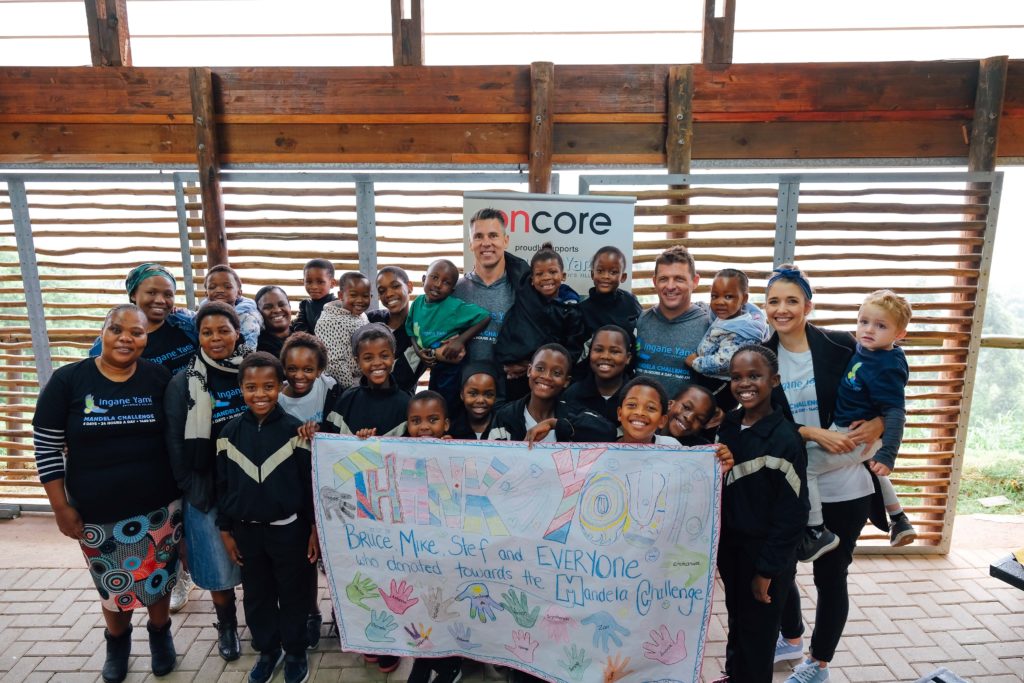 After 6 grueling days of non-stop pushing their bodies to the ultimate limit, Bruce Hughes, Mike Morris and Stefan Terblanche (SA Rugby Legends CEO) managed to complete their seemingly impossible goal! They conquered what is now dubbed the Mandela Rowing Challenge. Stationary rowing 1460km! The distance from Durban to Robben Island!

It was an incredible event! Anyone who took the time to pop in to the Village over those 6 days would have been touched by what they saw.  The environment was electric!  Friends and family came around to support the three rowers. There was always a buzz. Everyone chatting and connecting; so proud of what these men were setting out to achieve. Our children took every opportunity to cheer the men on: during tea break, lunch break and during every bathroom trip! These guys were pushing themselves to the limit, and yet there was so much laughter and fun. They played with the children and taught them rugby skills in between their rowing stints.

The end-of-the-race event was extremely emotional! Family, friends and everyone in the Village counted down as the three men all rowed simultaneously toward “the finish line”. As the three men completed the 1460km tears rolled down everyone’s faces. Bruce, Mike and Stefan had achieved the impossible!!

Their motivation throughout the challenge, was to build a home for six orphaned and abandoned children to call Ingane Yami home. Not only to raise funds, but to do so in a way that engaged the wider community; encouraging them to achieve this massive goal, together!

Bruce, Mike and Stefan achieved their goal and so much more!! We had donations come in from all across South Africa, as well as the United States, Australia, New Zealand and even Shanghai! We had the story of Ingane Yami told on media streams around the world, and people who had never heard of us before now know the heart of who we are and what we do.

And their monetary goal of R450,000 was blown out of the water, as they managed to raise an incredible R690,000 towards TWO new homes at the Village!

Speaking to Bruce and Mike after the challenge, you could see they were deeply moved by the entire experience. “Mike and I have done a lot of charity challenges,” said Bruce. “But this one was something truly special. We had the kids there with us, cheering us on all the way, and even helping a little bit with some of the rowing. This was a really memorable experience, and we’re so happy with the result. Thank you to everyone who supported us”.

We want to echo Bruce’s thanks:- to everyone who supported the event, big or small, THANK YOU! You have changed the lives of 6 vulnerable children who are soon to call Ingane Yami home. Stay connected with us to hear their stories unfold.

Introducing, our newest little girl, Akhona Akhona arrived at Ingane Yami in March 2020. She has fitted in perfectly to...

Introducing, our newest little boy, Thami. Thami arrived at Ingane Yami in December 2019. He has settled in beautifully to...